0635. Prince And The Revolution
Purple Rain 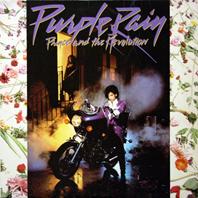 Whatever happened to popstars starring in their own movies? Did Vanilla Ice kill off that particular genre?

From Elvis' Love Me Tender to Michael Jackson's Moonwalker, music movies starring stars always has seemed to get the fans going, but after Cool As Ice I can't really remember one even being made (except for Mariah Carey's Glitter), let alone a successful or even good one.

Anyway.
Two years after 1999, Prince released what I'd say is some of his best work. It's the Oscar winning soundtrack of the (cult) movie Purple Rain, starring Prince (of course), and also being an inspiration for the Parental Advisory sticker. So, yep, it's one to hear.

It's also, as stated, a great album. Even though Take Me With U and The Beautiful Ones may be weak tracks, the trio Let's Go Crazy, When Doves Cry and Purple Rain make up for it in droves (cause, not to sound like a fret-geek, but the slow solo on Purple Rain is a killer - very simple, but delivered with a feeling underlining the mood of the song set by the hollow sound of the intro).
And Darling Nikki is of course a must if you're interested in what caused the development of the Tipper Sticker.
Didn't Beyonce do a pretty decent music movie recently, by the way?