0875. Robbie Williams
Life Thru A Lens 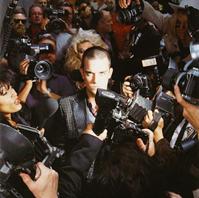 One of a very select few boy-band boys to get out of the fold with any kind of integrity left, Robbie Williams' solo debut takes jibes at former band mate Gary, calls Kate Moss "Cocaine Katey" and generally just makes the most of his semi-bad boy persona.

But not to worry, he also sings a ballad about his mom in a sort of religious way. In general the songs have a big production, meant to instill a feeling of them being grander htan they are, and with some catchy melodies the singles of course were hits.

Outselling his old outfit Take That and getting a hell of a carreer, but being kind of boring.