0849. The Fall
This Nation's Saving Grace 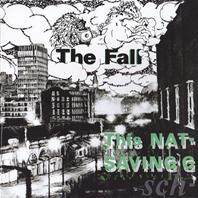 Okay, here's we are with The Fall: smack dab in the middle of Live At The Witch Trials and The Infotainment Scan we meet Mark E Smith with a new band (and yet again with people walking out or just being absent from recording).

And yet again it's like the demo stage of a good band, you know - right before they sacked the singer and made it big with better poduced versions of their old songs?

Thre are embryos to pretty cool stuff, and here I have to mention the one and a half minute instrumental album intro Mansion, which, with a bit of touch-up could have been the musical theme for the album (which coincidentally also ends with a version of Mansion). Also it's nice that they did a tribute to Can's Damo Suzuki, but it would have been nicer if it would have been better.

As for the rest they're very much the stuff that could have been, but thanks to Smith's ego isn't - It would be easy to plot how good a The Fall song is just by having amount of lyrics as the x-axis.