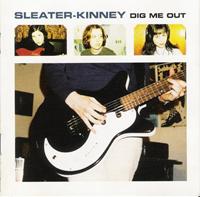 This is only the second riot grrrl album on the list? Why?
This time it's Sleater-Kinney who, unlike Le Tigre and their electroclash, go with the punk and indie vibe.

The song that really hooks me is Turn It On - it's just got that melody and tone to it. And sorry for the tangent here, but I don't know if it's Tucker or Brownstein that sings lead [fact check: its Corin Tucker], but I do know that her style has been copied by many other riot grrrl punk singers.

The quaver is so familiar that it's almost a genre brand (and of course she's also had predecessors in, among others, Dead Kennedys and The Undertones). That fact, of course, doesn't make it bad, cause the album's great, but it's something that occupied my mind while listening.