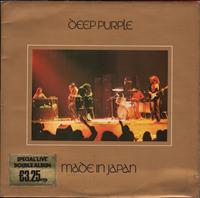 In a time before live albums were standard in every band's discography, Deep Purple played Japan's Budokan and Festival Hall, and made an album for their Japanese fans only. And if you've read last Tuesday's review you know what happened next.

This is probably everything that people hate about heavy Seventies rock: larger than life lyrics, extensive solos, and a dude playing the organ. And while I agree that the lengthy drum solo in The Mule is too much (seriously, it's almost five minutes out of a nine minute song), and that the vocal/guitar duel in Strange Kind Of Woman is a bit silly, I'll still argue that this is one terriffic album.

Taking the tapes back to the West for a local release, Made In Japan went platinum and is considered one of the greatest live albums for like EVAR!!11! (yes, exactly like that). And before you go off on a tangent on how the Budokan's got magical music recording powers, I'll just calm you down by saying the Festival Hall tracks are the better ones.

The double album opens with Highway Star, and of course they do Smoke On The Water (in a fairly straight forward version), but it's surpassed by miles by Child In Time, which has to be one of the top fifteen rock songs, and this version is only a bit bruised by Ian Gillan's ad libbing, but that's okay - I love it anyway.

The album finishes with a near twenty minutes long version of Space Truckin' (I like the hiphop style beat that comes in around the twelve minute mark) and you know how I feel about songs that goes above and beyond the standard lenght.