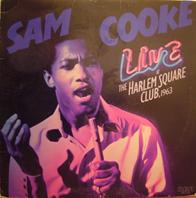 Why is this the first time Sam Cooke's turned up on the list?
Sure, he's mentioned on the side on Aretha's album, but with at least ten albums released during his day it seems like some pretty steep odds that the most important of them would all appear in the last two-hundreds of the list.

This live recording of Sam's live set in Miami's Overtown is energetic, catchy, and very happy. And it would be a lie to say Cooke wasn't a good songwriter - Chain Gang and Twistin' The Night Away has company with a bunch of other tracks that are equally or nearly as good (but for some illogical reason the Medley (It's All Right / For Sentimental Reasons) wasn't among the tracks I had available).

For some stupid reason the book (1001 Albums You Must Hear…) claims Live At The Harlem Square Club, 1963 was released in 1963, when it actually first came out in '85, misleading readers to believe this could have influenced a couple of more generations' views on how live soul could / should be sung.

A pretty wierd thing to do, but I'm sure I've seen them do it before.