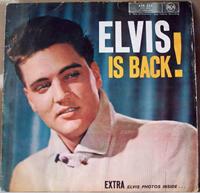 And I got to admit almost get a li'l bit turned on when Pelvis starts singing Fever - the song's just too damn good to be straight too. But the country crooning of I Will Be Home Again doesn't sound like him at all, a bit strange as it's somewhat familiar turf.

But ehat can I say? It's an Elvis album, so of course it's got both hits (Such a Night) and misses (Dirty, Dirty Feeling), and this one's significant in the Elvisology of music as the start of him going more into mainstream pop rather than just rock'n'roll.