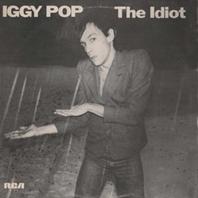 Co-written and produced by David Bowie during his Berlin years, Iggy Pop's solo debut has more going for it that it manages to handle. Very artsy in intent with references to Dostojevskij in the title and Erich Heckel in the artwork as well as the pseudo-genre Kraut musically, it's the wrong context for Iggy.

There's a hint of The Passenger's nah-nah part in Dum Dum Boys (the song about his old band-mates in The Stooges), but that's about the only link to his later endavours. It's not the style you'd expect from Pop and it doesn't seem to a style he's comfortable with either as it never takes off.

And also there's this:
Ever since I first heard it in the eighties when Bowie made it into a hit I've been annoyed by China Girl. It's just vulgar fetischising and colonial values shining through (not to mention the "China girl" in question was actually Vietnamese).

Barely makes it into the okay-listing due to historical significance.