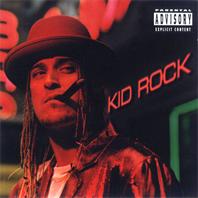 Sorry, Kid, but white people using racial slurs against blacks still doesn't fly, so no matter how "personal" and whatever you call it Black Chick, White Guy gets you the axe.

Here's rap (NB! not hiphop) for people who nowadays are the Tea Party "movement", aiming at a segment that doesn't traditionally buy rap albums (which he emphasizes with the line "I'm not straight outta Compton - I'm straight out the trailer" in Cowboy, and by letting Mitt bleedin' Romney use one of his later tracks as campaign theme). People who don't realize that if Kid Rock really thought of them as "his" people, he'd damn well want to pay taxes to help them out of the trailer parks.

It's rap over hefty chunks of rock guitar (while the selection of samples are from the standards of hip hop, plus some novel stuff). As for Kid rock's rap style he goes from random rapper to constipated, depending on whether he's trying to sound laid back or aggressive.

A guest appearence by Slim Shady (a.k.a. Eminem) in F-ck Off, half a year before his breakthrough, mostly shows that he had a lot of studio time to go before he could flow over a rock-rap track.

Not impressed, though the music's at times catchy.