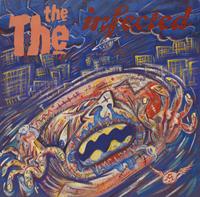 Another album where Neneh Cherry makes a cameo (in Slow Train To Dawn), The The's second release of course has some Swede cred, but apart from that, it's not so remarkable.

There has been a fair share of sordid and horrendous retellings of sexual encounters on the list, but I don't think there's been anything quite as tasteless as in Out Of The Blue (Into The Fire).
Yes, I'm including the gangsta rappers.

While the title track and a couple of more does have their moments I think Matt Johnson (a.k.a. The The) has gotten an easy ride due to both connections and his politics - his up front anti-Thatcherism and anti-imperialism got him in league with blokes like Billy Bragg.

But boring and overproduced is what it is.