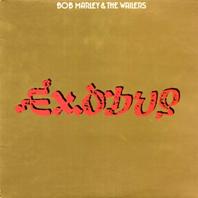 After being shot alongside with wife and backup singer Rita, Bob Marley packed it up and scooted off to London, recording what would prove to be the big international break-through for him and the Wailers (Catch A Fire just broke them into new demographics).

And it's no questions needed as to why.

At least seven of the ten songs are heard every summer on mixtapes and playlists in parks and festivals just about everywhere. Most of them are on the more peaceful B-side with it's message of love.
Myself I prefer the more political A-side, with The Heathen and the title track. Not that Three Little Birds and One Love isn't great songs, but maybe I'm just a sucker for grand battles.

By the way: I'm starting to think I've got some kind of reggaetourettes, though, cause when listening to Natural Mystic, Marcus Garvey pops up in my mind (although Garvey is in fact name-checked in So Much Things To Say, the song just after ...Mystic, but that's beside the point).
Wierd.