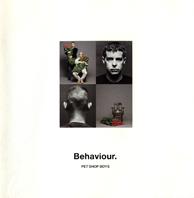 Maybe a bit more mature, but clearly more melancholic, than on both the predecessor Very and the successor Actually, Behaviour is a study in, well human behaviour.

Songs about first love, infidelity, jealousy, pop stars making fools of themselves and (as in the case of Being Boring) reminiscense and loss. Sadly, the goddamned house-piano shows up here and there again, ruining the party.
The cycle of songs found on Very doesn't seem to be so pronounced here, and so the good songs are a bit more commonly occurring.
[Fun fact: one of the tracks that didn't make the cut was Miserablism, a satirical song about Morrissey, made even more fun by ex-Smiths' guitarrist Johnny Marr appearing on two tracks on the album. No love lost there, I guess.]