0896. Brian Eno
Before And After Science 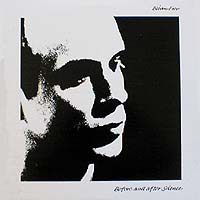 Okay, so Brian Eno's got a bit of a roller coaster ride here on the list - his solo stuff almost always seem to trump his production skills (notable exception here).

And I'm pretty sure that right after he finished this, he went on to convince Bowie to mess up the B-side of yesterday's album.
But this? This I'm amazed by.

Trying just about every style he can think of and possibly a couple that weren't invented yet, I think this has to be one of Eno's career highlights.

Also, it reminds me a bit of Talking Heads (whom he was producing at the time, to great success).
Unfortunately he breaks the spell for a while with Here He Comes, with its fifties drums it gets on the wrong side of anachronistic. Also, after it the whole album slows down considerably which makes it stand out even more.

But it doesn't manage to kill off the vibe from No One Receiving and Kurt's Rejoinder.