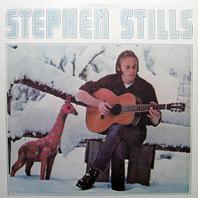 When it comes to Stephen Stills' solo-venture after Déja Vù, I'll have to say it's not as good as band-mate David Crosby's. This of course doesn't mean it's a bad album, just that it didn't go the whole distance.

Although it's become the themesong for a million cheating douchebags, Love The One You're With is still a good song, and it's cool that it's based on a Billy Preston quote.

Jimi Hendrix laid down some good riffs on Old Times Good Times, and the same goes for Eric Clapton's appearence on the next track, Go Back Home.

The blues and gospel style is a soothing and very confortable sound for Stils, but it could have used a little more friction on it.