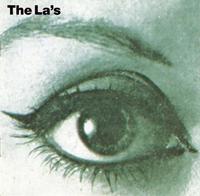 I never thought it could be so refreshing with a string of pure pop songs, and I'm amost a bit disappointed when the hit There She Goes pops up - it and the closer Looking Glass steps away from the sound of the other ten songs in a way that puts a damper on my enthusiasm.

But not much and not for long, cause The La's is a tiny masterpiece of an album and this was actually a welcome rest from the last days highly opinionated releases.

A difficult band to say the least, the recording of this album was a battle between the band and a string of producers, the last of which actually took the semi-discarded sessions and pieced them together into this release.

Unfortunately, this lot's blamed for inspiring acts like Oasis, but don't hold that against them, cause The La's only album is a gem.