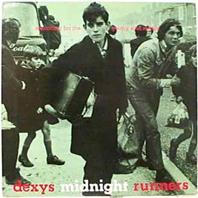 Third time on the list and so we've gone through all of Dexy's Midnight Runners' albums for the Eighties. And if they were pretty miserable on Don't Stand Me Down and fantastic on Too-Rye-Ay, they're in-between here on their debut, Searching For The Young Soul Rebels.

Cause the album criss-crosses between really good stuff like the instrumental The Teams That Meet In Caffs (possibly the best track of the album) and creepy things like the intro of I'm Just Looking (there's just too much saliva in his whispering).
But all in all, Geno and other songs bring it to the good side.

Fun trivia about the album: since their label was cheap bastards, paying Dexy's about half the usual rate, the band kidnapped the master tapes after the final mixing session and made their escape. Some shenanigans and hijinx later, the label caved (upping the pay to 75%) and the tapes were returned.

Maybe something more musicians should do.