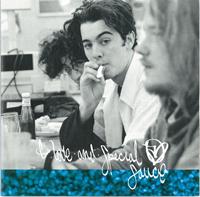 Reminding me of a bro-ified, lesser version of Mindjive, G. Love & Special Sauce's almost eponymous debut (okay, so only the use of an ampersand instead of the word and is the difference, but still) is a rather dull one. Where Mindjive had energy, the Special seems to have left the Sauce alone for G. Love.

Sure, you could call it laid back, but it feels more like "nah, can't be bothered to make an effort". Cause in every song, there's a feeling of them coming up with an idea, getting in the studio and knocking it around until it sounds okay and then someone reminds them it's beer o'clock, so that cut's perfect (except it ain't).

It's not really bad, but it's just so far from acieving its potential. And which song they ripped the piano from in This Ain't Living sadly eludes me until I realize it's just damn similar to the sample in 2Pac's Changes, which leads me to The Way It Is by Bruce Hornsby And The Range.
Not enough to be called plagiarizing, but similar enough to get my spider-senses tingling.