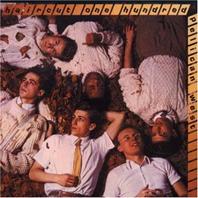 With a band name and album title sounding like a word jumble or re-captcha stoytelling, my expectations are post-punk/new wave and lo and behold: New wave it is. A genre that I've just realized is more of a metadescrition than an actual description.

Haircut One Hundred almost seems like the stereotype for the rise and fall of a band: formed two years before releasing their debut (this album), got a string of top ten hits, toured the world - and just before the happily ever after, the singer got some problems, leading to instability in the band, he leaves / gets kicked out and the band releases album number two which doesn't fare as good, and they split.

I like it, they remind me of The Beat and other 2Tone associated bands, and like the bands on that label Haircut One Hundred isn't afraid to throw in an instrumental (Lemon Firebrigade), nor to make danceable music. In other words: this is percussion- and funk-infused pop that puts a bounce in your stride.