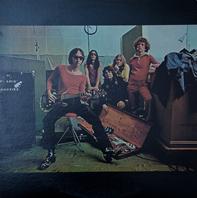 Well, this day in age I'm not sure if the title of this album would manage to avoid a Parental Advisory sticker, but back in '71 I guess it was percieved as a reference to the Monkees album. But with lines like "you got to mow the lawn if you want to get along with me" (from Doctor Boogie) and the title track's "I'm a child of atom bombs and rotten air and Vietnams" it's no highschool hop.

For the most part this sounds very much like a punkier Rolling Stones, though. [fact check: apparently Jagger thought so to, as he's been noted (and quoted) as saying they did a better modern blues job than the Stones did on Sticky Fingers, released the same month] Sadly, they had a far stupider (and more time-bound) name, which could account for some of the lack of success.

This also proved to be their sort of final album, as the singer quit later the same year and the band only released one more album of new songs before going on a hiatus some years later.