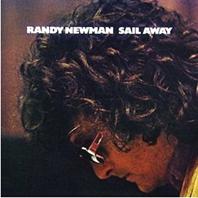 An album where the lyrics make all the difference, Sail Away is a half an hour of smartly written satire. Also it's far removed from Newman's maybe most recognized work - a bunch of Disney/Pixar soundtracks.

Taking on god, slavery and the U.S. of A. (not neccessaily in that order), Randy isn't out to make friends, that's for sure. But with a good natured melody accompanying the scolding, it's probably hard to keep a grudge while listening to Political Science, no matter how much of a patriotic American you are.
An honorable mention as a listen to-track is Gods' Song (That's Why I Love Mankind) - a dialogue between man and God.

A bunch of these had already been recorded by others (and a whole bunch of others have covered them since - whether they understood the meaning or didn't get the sarcasm at all), but it's good to hear them performed by the originator.